Lathered waves splash on my face

Golden sand trickle beneath my feet

Cool ocean breeze caresses me with a kiss

What a feeling of heavenly bliss

Anjarle hidden inside the coconut palms

Anjarle is an idyllic village on the Konkan coast of Maharashtra in the Ratnagiri district. An ideal weekend getaway about 240 Kms south of Mumbai and about 200 Kms west of Pune. This picturesque destination is an ideal place to master the art of doing nothing. Although the village has modern amenities like tap water and electricity it seems as if time has stopped in the days of yore.

With a long and wide beach studded with coconut palms, Anjarle is a place to be at for experiencing peace and solitude. There’s only one resort in the village and few homestays available. Anjarle is yet to appear on the tourist map due to which it has remained serene and secluded from mad city crowds.

Anjarle is a place to be at for experiencing an enchanting monsoon …. a true Konkan experience. Even better is the month of Shravan and Ganesh Festival (month of September) when the rains recede and nature is full of life and bloom .. greenery all around with an mesmerizing mist in the air, the atmosphere gets filled with divinity with the onset of Ganesh festival.

At Anjarle, experience a lazy morning in a rustic homestay sipping hot tea from a chool (clay Owen) while listening to the sweet melody of the Koyal, with the cool morning breeze caressing the soul, watch dew drops laze on the colocasia leaf and the tune of village temple bells ringing distantly.

By Rail – Khed station on the Konkan Railway is the nearest railhead for Anjarle, 52 Kms away. Many south bound trains to Goa, Mangalore and Cochin halt at Khed.

By Road – From Mumbai, there’s a direct ST night express bus from Parel Depot – departure 22:00 hrs. The bus reaches Anjarle at 5:30 hrs. next day morning, an overnight journey of about 8 hrs. Alternatively, take an ST bus for Dapoli from Mumbai, Anjarle is 20 Kms north of Dapoli and can be reached by an local ST bus or shared Auto Rickshaw from Dapoli.

From Pune, Chandni chowk, drive downhill from Tamhini Ghat to Vile and onward  up to Mangaon to reach NH-17, continue till Lonere phata, take a right turn at Lonere phata and drive towards Mandangad > Velvi > Anjarle.

During Monsoons, avoid the Mandangad route and instead take NH-17 ahead of Lonere phata > Mahad > Khed > Bharne Naka > Dapoli > Anjarle.

Ketki Beach resort is the only resort in Anjarle bang on beach and is the height of luxury in Anjarle. The resort is owned and managed by Nandu Nijsure. The rooms are clean with basic amenities like air-conditioning, satellite TV, good bed and linen, in house restaurant serving Konkani cuisine and ample parking space. The resort also has independent cottages and is set in a coconut and betel nut plantation right next to the sea.

The villagers make homestay arrangements in Anjarle for travellers, Prabhakar Tondalkar in Bhandar wada of Anjarle has a good homestay with independent rooms and serves delicious Konkani veg. and seafood.

Anjarle beach – is a wide and long beach which is safe for swimming. There are no life guards on the beach being a village. Every year, villagers volunteer for the Sahyadri Nisarga Mitra (SNM) NGO Olive Ridley Turtle conservation. The Olive Ridley Turtles lay about three to four nests in the sands of Anjarle beach. Each nest has about hundred eggs. The SNM volunteers transfer the eggs in to artificial nests created inside a well-protected hatchery near the village. The eggs begin to hatch in late February and March and the hatchlings are safely released by the SNM volunteers in to the sea.

Harnai Port – is a well-known port known for its auction of fresh catch. Trawlers offload the catch at the jetty at around 6 a.m. when locals and hoteliers crowd to grab their share of the catch in an auction. Thermacol ice boxes are available at the jetty for packing the fish for a takeaway back home.

Suvarnadurg sea fort – is a sea fort off the Harnai Bandar. It can be reached by a ferry boat from Harnai Bandar. The fortifications of the fort are still in good condition but the buildings inside the fort are in ruins. The fort was conquered by Chhatrapati Shivaji from Adilshah who is believed to have built it. Suvarnadurg was an important naval base of the Maratha navy and a strong hold of its admirals – the Angre’s.

Murud beach – Also known as Karde Murud or Dapoli Murud to distinguish it from Murud Janjira which is also on the same coast to the north in the Raigad district. This is a serene beach with long stretches of sand frequented by city crowds from Mumbai and Pune on weekends and holidays. Murud has some good beach resorts and hotels. The beach also has water sports facilities like Jet Ski and Banana Boat rides along with para sailing and dolphin spotting rides.

Dapoli – is a town and taluka place. It is a place from where local ST Buses and rickshaws are available for various beaches and villages around. The chocolate paan of Dapoli is very popular. Jagadish restaurant in the market is popular for seafood and Sanman hotel diagonally opposite serves good Konkani vegeterian cuisine. 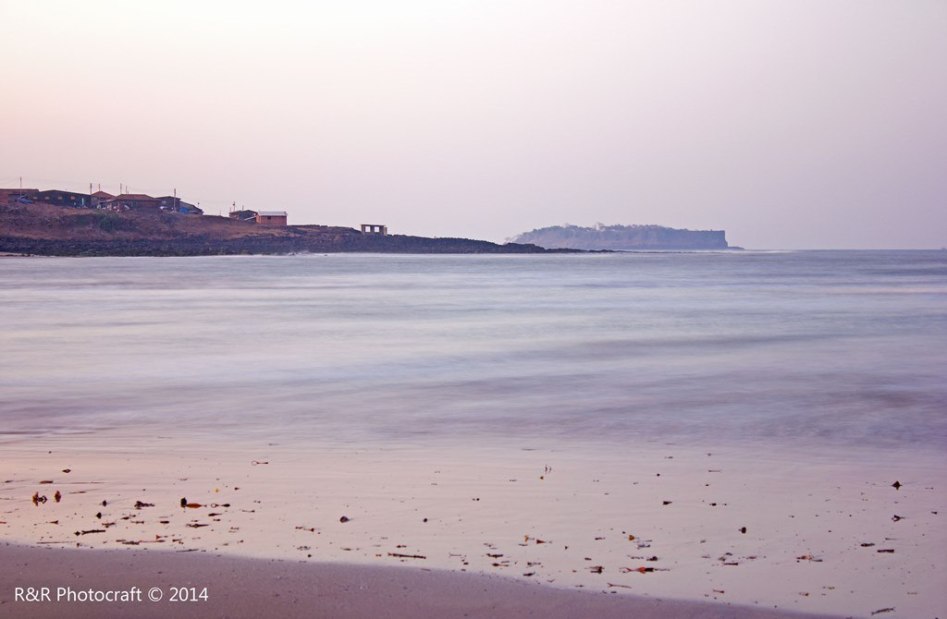 During summers, the famous Ratnagiri Hapoos (Alphonso) mangoes are abundant .. an ideal time to enjoy yummy Aamras poori. Jackfruits are also abundant in summers along with the ubiquitous Konkan mewa of Karvanda, Jambhul, Cashew, Amla and Kokum.

Being in close proximity to the Harnai Bunder .. a major fishing hub, Anjarle is also a place to relish some scrumptious seafood – King Fish, Pomfret, Prawns and Mackarel .. have it all.

There are no restaurants in Anjarle, except few provision stores. The in house restaurant of Ketki beach resort or a homestay are the only options available at Anjarle.

There’s nothing spectacular to shop at Anjarle.